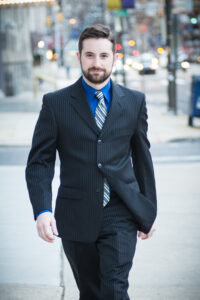 “When collaborating on a creative project, music isn’t simply a means to an end.  It’s not just there because it’s necessary to have some background noise.  Truly great music is tailored according to a directive vision and provides some of the most substantial, yet most intangible emotional content to the media for which it was created.  It has the power to shape stories and mold memories.  And it’s what I was made for.”

Nathan Gulla is an American composer and performer located outside of Philadelphia and Allentown, Pennsylvania.  He composes media and concert music, through which he writes emotional scores that shape the drama and tell a story.  Nathan’s compositional focus is primarily on video game music.  He has been featured on several video game remix albums through Materia Collective, including the recently released Eidolon: Music from Final Fantasy IX.  He has also written arrangements for the University of Maryland and Washington Metro Gamer Symphony Orchestras which includes, most notably, a medley in collaboration with composer David Arkenstone featuring his music from World of Warcraft.  Nathan is currently composing music for two upcoming video games, and he also plans to release a new arrangement in November of this year.

Nathan has enjoyed performing for various ensembles in the area, including the Allentown Symphony Orchestra and the ASO choir, the Allentown Band, the premiere Men’s Choir of the Lehigh Valley known as Summer Harmony, and many others.  He has performed in such venues as the Kimmel Center in Philadelphia, the Smithsonian Museum in Washington DC, Glinka Hall and Peter and Paul Cathedral in St. Petersburg, Russia, and many venues in Ghent and Bruges, Belgium, among others.  He is also looking forward to performing a solo concert series in the Spring of 2020 for multiple local venues, as well as several upcoming collaborative opportunities.